4 Reasons Why Becoming A Vegetarian Is A Fucking Stupid Idea

Edit 9/10/14: Alright time to clear some air here. I started FitMole back in June 2011 and wrote this article in Aug 2011. Back when I started the blog I was trying to discover the best way to generate more traffic. So I thought to myself, “what’s the best way to get people talking?” So I came up with this article and the slightly edgy, and some might even call immature headline. And yes, I know the article can be seen as a bit offensive and ignorant. I still stand by my claims 100% that going vegetarian isn’t healthier than eating meat, but I do take full responsibility for some of the slightly ignorant comments I’ve made about animal cruelty. Other than that, can the person who keeps sending me death threat emails stop now 🙂

First off I just wanted to say I’m sorry. I normally don’t swear in the post title, but I just have to emphasize how stupid it is to become a vegetarian. It’s stupid, ridiculous, unnecessary, stupid, and did I mention it’s FUCKING stupid.

I have a couple of friends and family members that are vegetarians, and don’t get me wrong, I don’t hate them. I just can’t understand why they decided to follow this lifestyle.

When I ask them why they decided to become a vegetarian, they give me reasons like “Oh, it makes me feel good,” “Because meat is bad for your health,” or “I don’t want to harm animals.” Whenever I hear these reasons, I just put on my best “nod and pretend to agree with you” face. 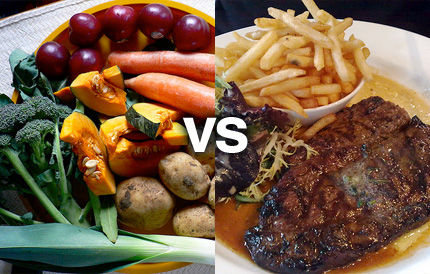 So why is becoming a vegetarian stupid? Lets take a look:

1) You aren’t saving the lives of animals

I get it. You don’t like it when the heads of baby cows and pigs are chopped off, but do you really think eating that tofu burger is saving lives.

Fruits, vegetables, and grains are a staple among vegetarian diets, but did you know that millions of animals die just so you can enjoy that piece of bread? Eating foods like grains means destroying ecosystems and all of its inhabitants. It means killing all the little animals, birds, bugs, and microorganisms that live among the fields.

Do you know how many little animals and microorganisms die when farmers use machines to plow through wheat fields? The answer is a lot more than 1 cow.

As cheesy as it sounds, everything in life requires sacrifice. Animals are killed to get meat and ecosystems are destroyed to get grains. So the next time I’m eating a steak, don’t you dare judge me for killing a cow.

When I want to believe something, I need proof. I need definite scientific proof.

And no, proof doesn’t mean reading a quote in Shape or MensHealth magazine. In order to convince me about anything I need to see a scientific study that shows causation not correlation.

For example, eating less food will make you loss weight.  This is a stone cold fact that will remain true no matter what.

However, there is absolutely ZERO proof showing that going vegetarian will decrease your risk of heart disease, cancer, or whatever nasty stuff you can think of.

The only thing we have are thousands of studies showing a correlation between an increased risk of disease and an increase in meat consumption. We have studies that conclude that eating meat “may increase” your risk of heart disease, but this doesn’t mean crap. It’s inconclusive and doesn’t prove anything. Saying that your risk of heart disease “may increase” from eating red meat is like saying you “may” be able to breath fire if you eat enough jalapenos.

And yes, before you get all crazy on me, I have read the China Study a.k.a the vegetarian’s wet dream. For those who don’t know, the China Study was a big study conducted by Dr. Campbell who basically concluded that meat is killer.

While the China Study garnered a ton of media attention a couple years ago, it is also an incredibly flawed study despite it’s massive scale. But talking about all the flaws in the China Study is beyond the scope of this article, so let me turn you over to a great article written by Denise Minger of Raw Food SOS. She did an amazing job in analyzing the China Study and basically debunked every single aspect of it.

People need to stop believing the mainstream media, and need to start looking at the actual research and facts.

I know this is a bit obvious, but being a vegetarian means that you don’t get to eat meat. EVER. That means no steak, bacon, horse, or BBQ ribs. The closest thing you’ll ever get to meat is some glued together crap made of wheat and soy.

And please, don’t tell me that your veggie burger tastes better than my double bacon cheeseburger, okay? Don’t tell me “Oh, but it tastes just like the real thing.” No it doesn’t, you rationalizing crazy person. It doesn’t matter how hard you try, a piece of tofu will never taste as good as a greasy piece of beef.

So if vegetarians are so concerned about their health, then why do they opt for highly processed foods likes breads and cereals that are not found in nature as opposed to real animal meat which has been around since…. forever. It makes no freakin sense.

4) Vegetarians are actually eating animals without knowing it!

This past summer, I took a Biology 101 class at a community college to fulfill some general education requirements for my degree. While the class was a complete waste of my time and I pretty much bull-shitted my way through it, I did learn something quite interesting.

I learned about the food web, which is basically description of “who eats who” in the environment.

This process happens EVERYWHERE in nature.

So even if you’re a vegetarian, you’re technically eating dead animals, albeit in a more indirect liquid form. But last time I checked, vegetarians were all about saving lives no matter what.

Don’t be a vegetarian

Despite everything you’ve heard, vegetarians are NOT the health conscious animal saving saints that they’re made out to be.

So if you’re a vegetarian, then hopefully I’ve done my job to piss you off beyond belief, and if I converted you, then that’s cool too.

Alright guys, be sure to share this article with every single vegetarian you know, and to close out this article I have 3 parting words: