I try to never make assumptions about people.

I get it, life is tough and shit happens.

Maybe a stripper you met 5 years ago knocks on your door and tells you that you’re the father of her child.

That’s never happened to me, but if it did, I wouldn’t let my health and body go to shit.

And after talking with thousands of people over the years, I’ve found that all their “excuses” for not being able to lose weight and get in shape are more or less the same.

I know I know, someone’s gonna say “But Keith everyone is unique and has special life circumstances you could never understand.”

But at some point you have to stop and wonder: If so many people are overweight and using the same excuses, maybe they’re not as special as they think they are.

Here are some of the excuses I hear the most and why they’re full of crap:

“I don’t have money”

But it doesn’t cost you anything to eat less.

Grow up. You guys are adults. No one is putting a gun to your head and telling you to eat fucking Taco Bell every day.

If you’re spending as little as $5 on Taco Bell (which doesn’t even get you much food) 3x per week, that’s more than enough to buy a week’s supply of “cheap” healthy foods like potatoes, beans, eggs, plus some veggies.

But shh…the people who’ve failed don’t want to hear that.

If I had the magic formula for staying motivated 24/7, I’d be the richest man in the world.

But motivation is temporary.

Motivation is watching an Youtube video and feeling a spark to do something for the next hour.

But it goes away, it always does.

What you need is discipline, the ability to do shit even when you don’t feel like it.

Funny thing about discipline is that once you start doing, you have no problem to keep going.

The secret is just getting started.

If you can’t squeeze in a 10 min bodyweight circuit a few times per week, then you have bigger problems, my friend.

Don’t have 10 minutes to spare? I really want to believe you, but I really sorta don’t.

Funny thing is, when I ask these people to show me how many calories they’re eating per day, they always have no idea.

Or they give me some fluffy answer like “not that much.”

“Healthy” is subjective and just because you think you’re eating healthy doesn’t mean you’re not eating a lot.

“I don’t have energy”

I love this excuse.

Not because I get off on people’s misery, but this excuse is a perfect example that illustrates the destructive power of being overweight and out of shape.

Here’s my expertly drawn image to describe what I mean: 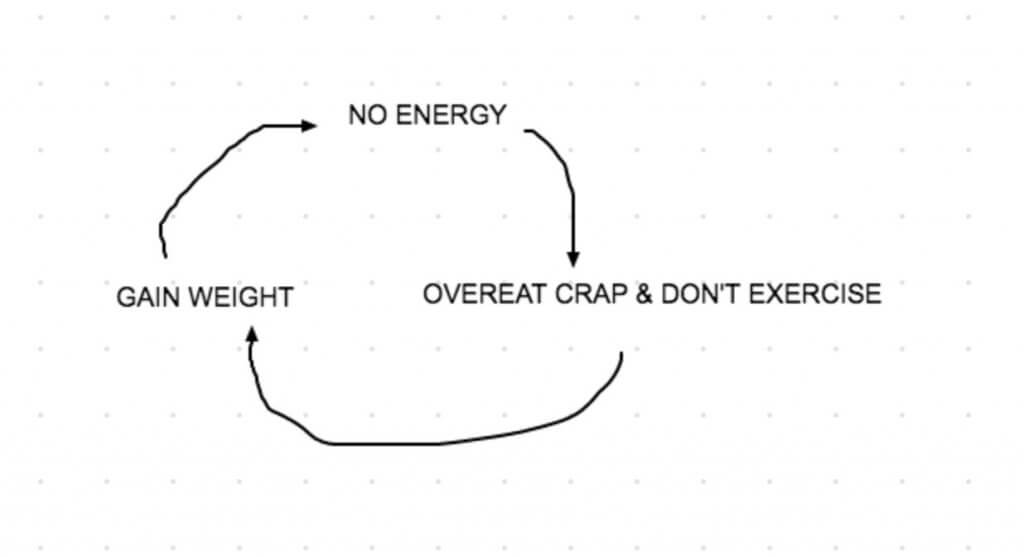 It’s a vicious cycle, and until you can accept that the very reason you can’t lose weight is the exact reason you need to, then you’ll be stuck forever.

Show me how much time you spend on your phone per day and watch me magically pull a whole bunch of time out of my ass.

FYI the average person spends 4 hours per day on their phone.

Even if we dive into more extreme cases, where someone is working 12+ hours per day, commuting 1 hour back and forth work, and taking care of a family…

It all comes down to a discipline and behavior issue.

Also, if you’re struggling to lose weight, not having time (in theory) should help you lose weight.

In theory, this is how things should go if you really have no time:

No time = no time to eat = lose weight

But here’s what really happens:

No time = lack of structure and plan = overeat = gain weight

What’s your excuse? Lemme know in the comments