It’s as simple as:

As someone who failed the math in high school, even I can do that.

With more and more people relying on Google and food tracking apps like MyFitnessPal, our biggest assets is actually causing the biggest problem.

Here’s what I mean.

Let’s say you go out to a Japanese restaurant and order some teriyaki chicken bowl with white rice.

You want to track calories but you’re not sure how many calories are in the bowl.

So you go to google and literally search “teriyaki chicken bowl calories.”

The following information shows up:

Oh man, this is my nightmare. Because I know a huge chunk of people are going to literally take 220 calories and log that as their meal.The biggest mistake people make with calorie counting is blindly using calorie data they find online.I get it.You’re at a restaurant where the nutrition info isn’t available. So you Google it, trusting Google will be somewhat accurate. But this is soooo wrong.“Generic chicken teriyaki white rice bowl” means absolutely nothing.You have no idea how Myfitnesspal came up with 220 calories. The ingredient breakdown isn’t listed.The amount of chicken or rice used isn’t listed. Not to mention that 220 calories is not a lot, in general.That’s the equivalent of 2-3 slices of bread or 1 scoop of ice cream. Chances are that chicken teriyaki bowl was a lot closer to 600-800 calories. The sauce some places use are absolute calorie orgies. And when you do this multiple times per day/week, it’s no wonder that so many people don’t lose weight despite “counting calories.” Yes, technically you are tracking calories……But the way you’re doing it is highly inaccurate.Blindly taking nutrition info off any website can heavily skew your calorie intake so you end up eating much more than you think.

You can go to a coffee shop and order a chocolate doughnut. But you can’t just log whatever calorie value you want. 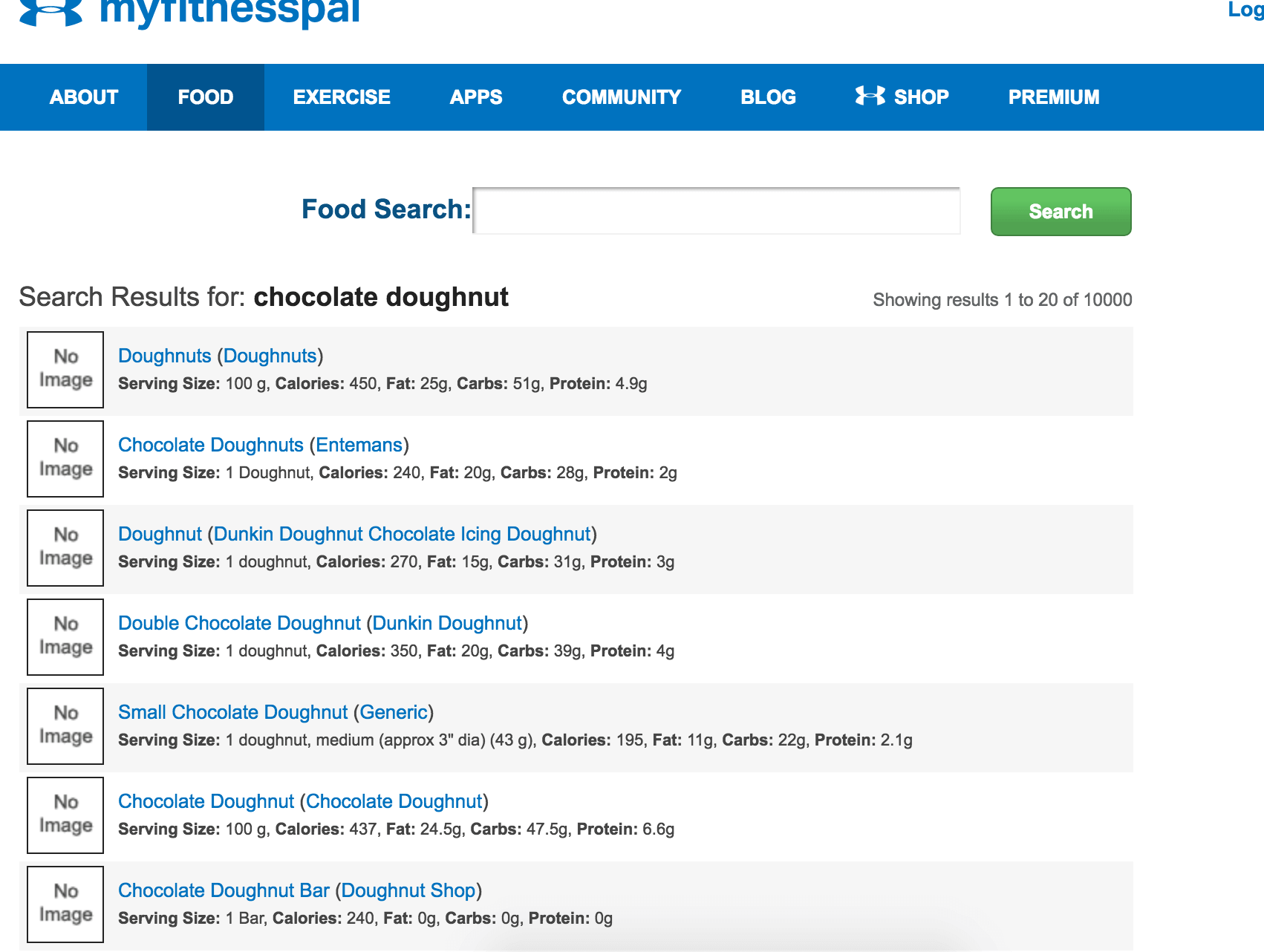 Take a look at the search results for “chocolate doughnut” in Myfitnesspal.

I once had a client tell me that he was tracking calories like a mad man but wasn’t losing weight.

He sent me his Myfitnesspal food logs.

I looked through his logs and he was eating a doughnut every day.

Which is cool if it’s being tracked correctly.

But then I saw that he was logging each doughnut as 200 calories.

He said “That’s what Myfitnesspal said.”

But turns out, the doughnut he was eating was much closer to 500 calories per doughnut.

That calorie 300 difference, done on a daily basis, will destroy your results.

So what can you do to actually track calories accurately?

Well above all else, stop blindly following nutrition content for anything you Google or find on Myfitnesspal.

But I’ve also found these 2 tips help the most:

Learn to estimate the calorie count for “base” foods

These foods, no matter where you eat them, will have approximately the same calorie counts across the board.

Why should you learn to estimate the calorie count for base foods?

Because they form the foundation for more complex foods and dishes.

If you know the base food calories, you can break down the entire dish pretty accurately.

In other words, if you know there’s about 300 calories worth of rice in the bowl already, then you wouldn’t use the 220 calorie count that Myfitnesspal listed for the entire bowl.

Let’s break the entire bowl down.

So on the high end, the entire bowl might be 800 calories, which sounds a helluva lot more accurate than 220.

Of course nothing is ever 100% accurate, but the important thing is that you’re in the right ball park now.

Ask yourself – Does this make sense?

Let’s say you’re eating the slice of carrot cake in the picture below. 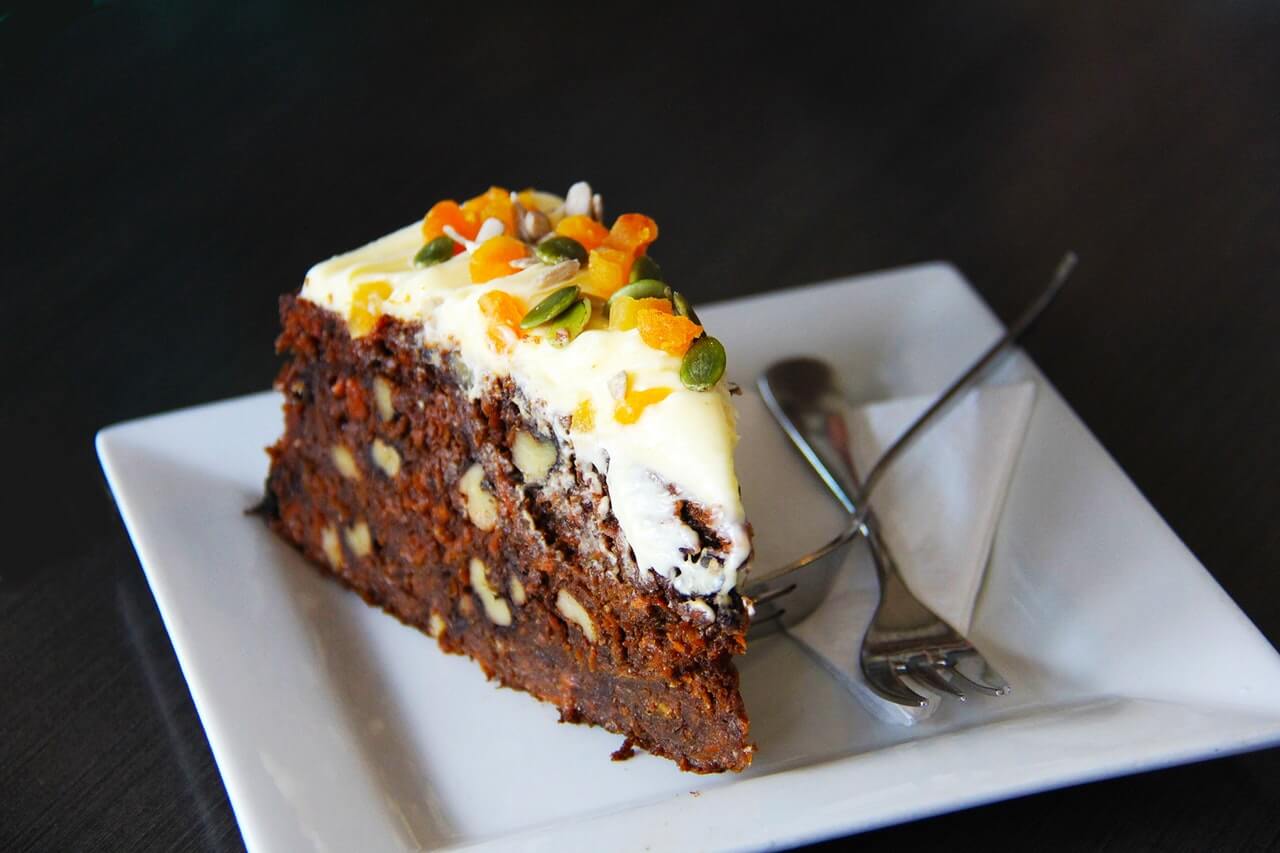 How many calories would you say that is?

If you Google it, and it says it’s only 120 calories for one slice, ask yourself – does this make sense?

Does it really make sense for a slice of carrot cake to have the same amount of calories as a 1.5 eggs?

Most carrot cake uses a crap ton of butter, sugar, and nuts, so the calorie count is going to be naturally high.

So the next time you look up the calorie count of a dish online and it sounds too good to be true…it probably is.

I really don’t like or enjoy strict calorie counting.

It restricts your ability to eat the foods you want and enjoy life.

But at the same time, I really don’t like it when people are royally fucking up their diet because they think the hot dog they ate that’s the size of Ron Jeremy’s dick is only 200 calories.

You should be able to go out to eat whatever you want.

But you can’t do that every day, be misinformed of the calorie counts, and wonder why you’re not losing weight.

That’s not how this works.

How do you track calories? Are you just using whatever information you find online, or are you making strategic and educated guesses?