Why “Eat Less, Move More” Is Crap Advice (For Most People) 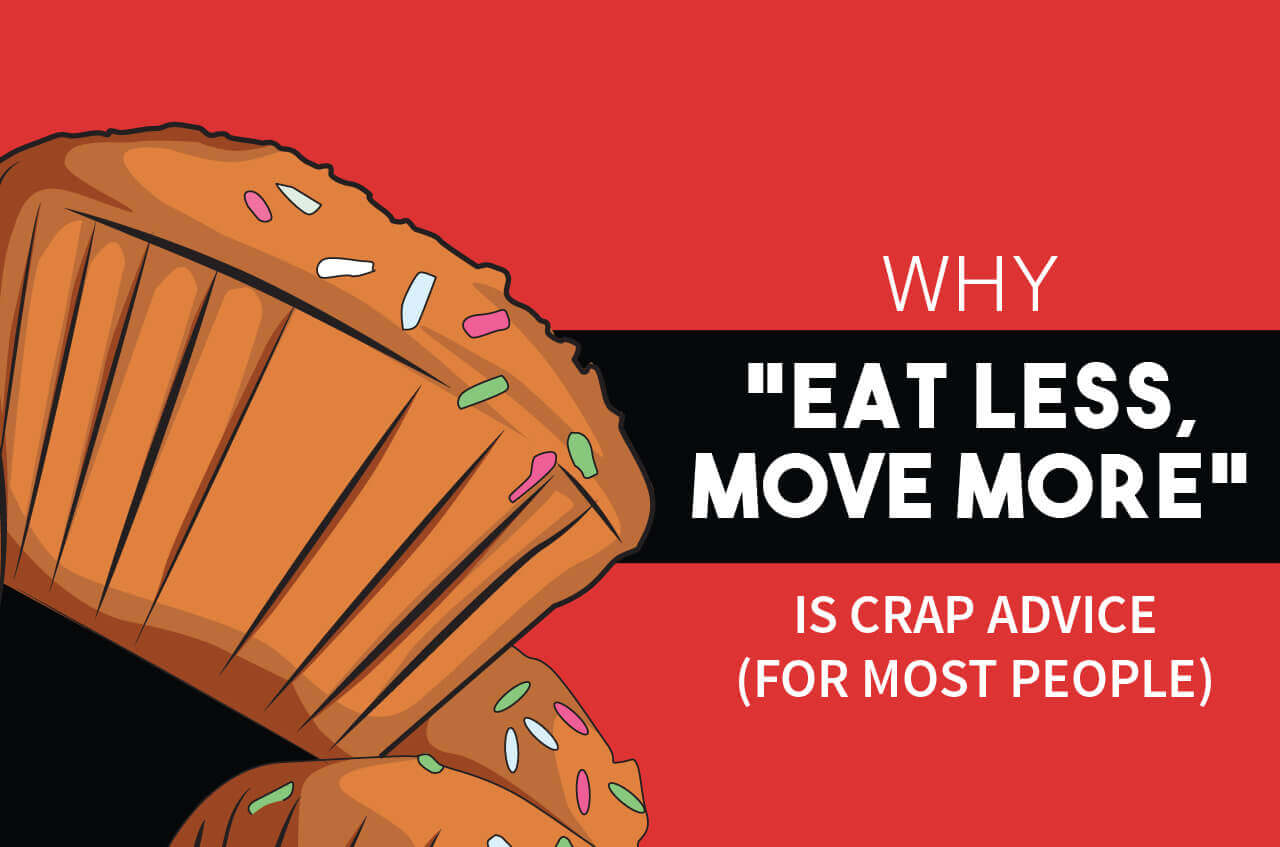 It’s like telling someone addicted to hookers and cocaine, “Hey man, you should stop banging hookers and doing so much coke.

It’s like telling an alcoholic to “Stop drinking so much bro, it’s bad for you.”

People are more overweight and out of shape than ever.

And while I’m not saying people are stupid, it’s clear that “eat less, move more” isn’t the right advice.

We need a different approach and I’ll show you how to do it below.

But isn’t weight loss just calories in, calories out?

At it’s most basic level, weight loss is an energy balance issue.

If you eat less than you burn, you will lose weight.

But just because it’s that simple, doesn’t mean it’s the best advice for someone to follow.

I tell people all the time that if they simply eat less, they’ll start losing weight.

But while that may be true, you’ll soon find out that the phrase doesn’t hold much value.

To the average Joe, “eat less, move more” has no real meaning.

To them, it means walking an extra mile here and there.

It means maybe eating an extra piece of fruit and cutting back on the fries at lunch.

But the big problem is that there’s no system or structure in place.

Without some sort of plan or system in place, most people have no idea what the fuck to do.

That’s why meal plans and macro/calorie guidelines are so helpful.

They give us a “map” on what to do and where to go next.

If you’re tracking how many calories you’re eating and you see you’re not losing weight, then all you have to do is lower the calories a bit.

As long as you know your numbers, you will eventually lose weight.

Click here for more info on tracking calories, macros, and my super simple approach to doing it.

But at least in the beginning, you should be tracking what you eat down to the gram, so you have some idea of what’s going inside you.

Find the best way to “eat less, move more” FOR YOU

There’s no other way to do it.

You’ll end up hating your life and wanting to kill yourself.

And as long as you hit some generalized baselines (find out how here),  how you do it is up to you.

Point is, there are an infinite amount of ways to “eat less.”

Same goes for your workouts…

The exact workout you do matters a lot less than doing something you enjoy and progressively getting better at it.

We can argue about rep ranges, rep tempo, and volume all day long, but that’s not what people need.

What people need is to get off their ass and just start doing something.

Then do that thing 1% better next time, and the time after that.

It’s pretty fucking obvious most people aren’t in crap shape because they choose to train in the 8-10 rep range instead of the 4-6 rep range.

Focus on what actually matters.

Follow these 3 steps instead of “eat less, move more”

When people message me for advice, sometimes I just want to slap them in the face and tell them to eat less crap and exercise.

But I also know this is largely useless advice.

That person already knows this.

And I just sound like a condescending asshole when I say it.

So here are 3 simple steps for you to follow that works 10x better than just “eat less, move more.”

For example, let’s say you need 2000 calories every day to lose weight.

That’s your only goal, every single day.

At this point we’re not even worried about macro ratios, meal timing, and the exact foods you eat.

Your only job is to get 2000 calories by the end of the day.

Think you can do it?

Hell, most people can’t even do this.

It’s a lot more useful than simply telling you to “eat less.”

There’s no ambiguity behind this.

If you can nail down the art of staying within a calorie limit every day, you’ll be 20 steps ahead of everyone else.

Now that you know how to eat less, it’s time to start moving around the exact foods you eat.

This is where you start to eat a little more protein, cut back on the doughnuts and booze a bit, and maybe eat a damn carrot stick every now and then.

While exact macro ratios are highly debatable, it’s very wise to use the following guidelines for fat loss diets:

Fats helps regulate hormones. But at the same time we don’t want to go too high when dieting since fats are 9 calories per gram (2x that protein and carbs).

And carbs usually act as the filler for the rest of your daily intake.

Step 3: Fuck with the other tiny details

Yes this even works for gaining weight and building muscle (you just need to ramp up the calories so you’re eating in a surplus instead of a deficit).

Step 3 is where all the tiny details fall under.

And you should only be on Step 3 after you master Steps 1 and 2.

Unfortunately, Step 3 is where 99% of people spend there time from the get go.

Who the hell wants to talk about calories and energy balance when you can just buy detox tea off Instagram?

So get your shit together and screwing around with details you know don’t matter that much.

Note: Obviously this isn’t a step-by-step A-Z battle battle plan on what to do to lose weight.

For the exact workout and diet blueprints to build the body of your dreams, I recommend checking out Superhero Shredding 2.0

They may very well need to eat less crap and exercise more.

But without some structure or a plan in place, that phrase holds very little value.

For a step-by-step plan on how to eat and train to build your best body ever, check out Superhero Shredding 2.0