Stop Being A Little Bitch And Forge Your Own Path 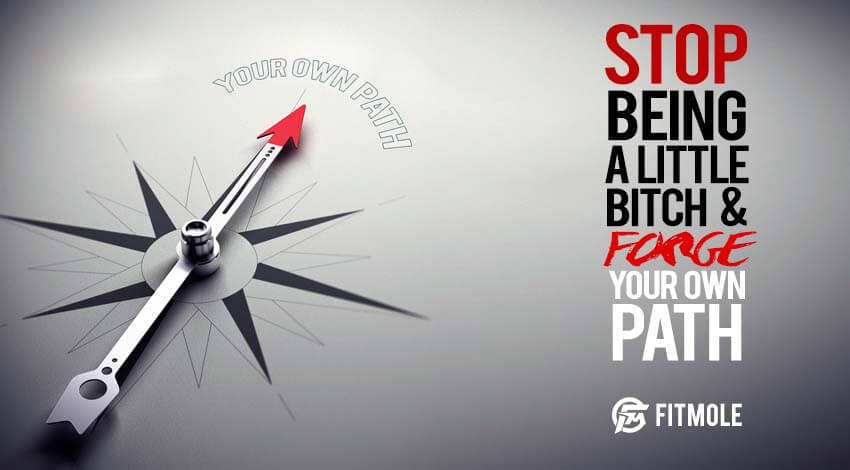 I’m going to tell you something that will blow your mind: there is more than one way to get in shape.

Squats and deadlifts are not the only way to build big legs.

You don’t need to cut all “refined” carbs and join the palo cult to achieve optimal health.

Hell, you don’t even need to join the gym and lift weights if you don’t care about building bodybuilder levels of muscle mass.

Who would have thought that there are actually other ways to get in shape that didn’t involve the hardcore, “train till you puke” mentality.

But that’s what fitness has become.

Everyone these days tries to back up their beliefs with scientific “research,” and everyone’s pointing fingers at how this diet or this workout is best because it worked for THAT guy.

Point is, don’t get sucked into the belief that there’s only one way to do something just because someone posts a naked selfie and says their way training or dieting is best.

You need to find your own path…your own way of training and dieting that fits your lifestyle and not just blindly follow random internet advice (yes, even advice I put out) and think it’s the best way to do something.

How I found my own path to grow my back

The picture above was taken about 2-3 years apart.

On the left was about after 5 years of on and off training. My training was incredibly inconsistent.

I mean, understood the principles of effective training and progression but never really applied it myself for whatever reason. And it showed.

My back looked very blah. Far from horrible, but nowhere where I wanted it to be.

On the right was after finally nailing my training down to an exact science of simply focusing on one thing – getting stronger.

My big problem with this was I could never “activate” my back muscles when doing bent over barbell rows no matter how perfect my form was.  For some reason, I had a really shitty mind-muscle connection and you need to contract your back muscles if you want it to grow.

So after a few more months of frustration, I decided to ditch the bent over barbell rows and just focus on 2 exercises I knew I was good at – weighted pull ups and cable rows.

Yeah, I know cables aren’t as hardcore as barbells, but MY back fired up like crazy when doing them.

And guess what happened when I decided to focus on these 2 back exercises?

My back started growing like crazy because it created an extremely strong mind-muscle connection and I progressively got stronger week after week.

The point is, if I kept trying to incorporate bent over barbell rows into my routine just because everyone else said it was the “best,” my back probably wouldn’t look like it does today.

I chose the best exercises that worked for me.

I chose what I liked to do.

I didn’t just do something because I was told it was the “best” way.

Are you scared to do something different?

I wanted to increase the size of my back and did so using what I thought was the best exercise out there.

I didn’t question the internet “big dogs” and was scared that if I wasn’t doing bent-over barbell rows, I wouldn’t be able to build a big back.

If you find yourself in the same situation, then I want you do one thing after reading this blog post – try something.

If you’ve been doing something that hasn’t been working for you despite everyone saying it’s the best way, then just try something else.

Even if your idea is a little “out there,” just do it.

There’s nothing worse than never testing and adjusting your methods.

It’s your life and no amount of science or shirtless selfie douchebags can tell you what’s right or wrong.

How have you forged your own path? Let me know in the comments below.

Note: Just so no one takes this this post the wrong way – you can’t just try ANYTHING. You can’t start eating in a 3000 calorie surplus every day. and just “try it” to see if it will help you lose weight (hint: it won’t work). You still have to work within certain rules of fitness. You still need to create a calorie deficit to lose weight, you still need progressive overload to build muscle. It’s how you work within these rules that I want you to experiment with.

Note 2: One of the big ideas behind the upcoming release of Superhero Shredding 2.0 (update: It’s live) is to give you as much flexibility as possible. So I’ll be including a bunch of new splits as well as custom training templates so you’ll have much more control over how you train.