Robert Irvine Workout: The Secrets Of TV’s Most Ripped Chef 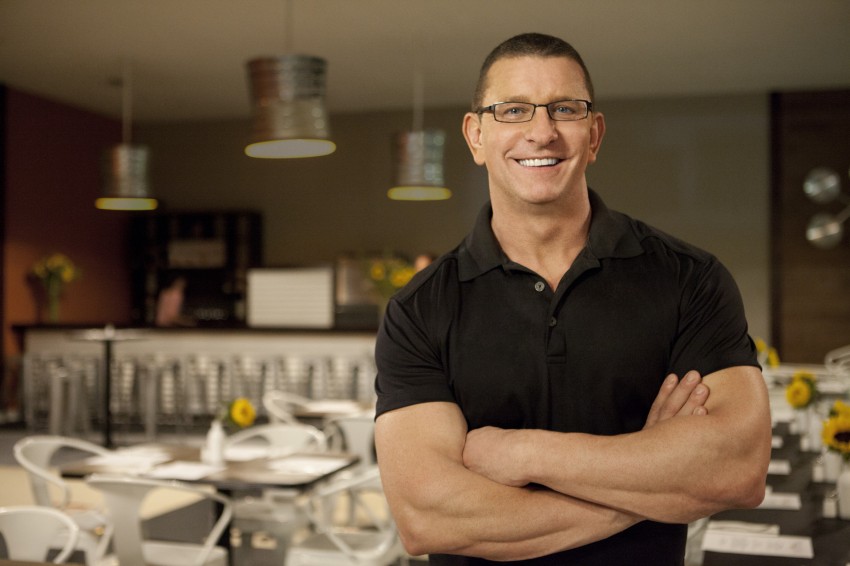 I’ll admit, Restaurant Impossible (and previously Dinner impossible) is the one of the few cooking related shows I actually enjoy watching. This is probably due to the fact that it barely has anything to do with cooking and just revolves around Robert Irvine screaming at restaurant owners the majority of the time.

But yeah…let’s cut to the chase.

If you’ve ever watched Impossible a couple time, you’ve probably wondered the following:

1) Does he wear anything but fitted black polo shirts?

2) The dude is fucking huge, what’s his workout program?

It’s true. For a 49 year old, Robert Irvine is in pretty exceptional shape. But how did Irvine do it? What exactly does it take to essentially be the buffest chef on tv.

In order to build up his muscular physique, Robert Irvine followed a few rules.

According to NYT, Robert didn’t lift super heavy weights. Most of his lifts were done in the 10-25 rep range. There’s definitely nothing wrong with this, especially if you’re not training for pure brute strength.

I don’t do heavy weights. I’m 47 and too old for that now

Growing muscle is all about getting progressively stronger, and you don’t necessarily need to be pushing your 1 rep max every time. As long as you’re getting stronger (e.g. pushing more reps) regardless of the rep range, you’ll gain muscle.

2) He follows a bro split

By “bro split” I mean Robert trains one body part per day. He hammers one body part such as chest and then waits about 1 week before training it again.

Scientifically speaking, this type of workout isn’t too effective. Most people do best when training each muscle group 2x per week but there are a few genetically gifted that can pull off the bro split with great results. I guess Robert is one of them.

I’m not a huge fan of running but Robert does it so he can keep his endurance levels up when working his show. Every day he’ll run for about 20 minutes via treadmill or elliptical machine.

Yeah I was a bit surprised too, but according to Robert,

I very rarely do legs because I do cardio about 20 minutes every day. So I try not to do too many leg workouts other than running.

I think that’s a pretty huge mistake. I don’t expect Robert to start squatting 500 pounds but your legs are one the largest muscles in your body. Does it really make sense to not train them at all?

Obviously you won’t look like Robert Irvine since he has decades of training experience on you, but the workout below is a great way to jump start your muscle building efforts.

Any questions about the Robert Irvine workout? Leave them below and I’ll answer them.