Side Note: Obviously the random white dude in the pic is not me. The following is a guest article from my friend and personal trainer Thomas Rhomer who runs Rohmer Fitness. Thomas took some of tips and advice from FitMole and worked his way up to a monster 120 pound weighted chin up. He outlines his process for pulling it off below.

You care more about getting aesthetic and attracting women than you do building strength.

I know that I sure did.

I mean when a woman first sees you, she doesn’t think, “Oh wow I wonder how much he squats?”

However, I now know the truth:

I struggled with the 2nd truth for a long time.

In fact, it wasn’t until I read this FitMole post that a light bulb turned on:

My Road to 120-Pound Weighted Chin-Ups

I’ve been lifting weights for over a decade now. Granted, a lot of those years were spent just spinning my wheels, but I had still made some progress.

So when I started implementing Keith’s advice on October 22, 2015, I could do weighted pull-ups with 60 pounds for 5 reps. 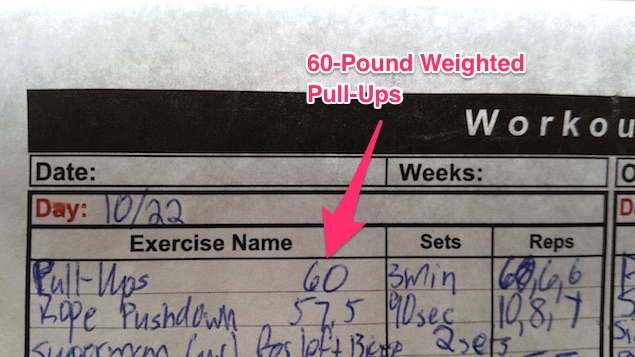 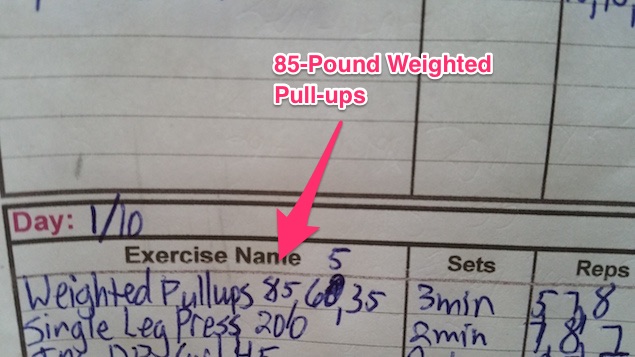 A week later, I was curious to see how good I could do with the chin-up variation and I got 120 pounds for 2 reps (super close to a full 3).

Is gaining 25 pounds on your pull-ups in 2 ½ months super sexy like most other fitness headlines you see?

“Wear this belt for 10 minutes a day and get abs.”

“Trainer uses this 1 weird trick to get his clients jacked.”

“Juice made with ingredients from the Amazon rain forest will have you lose 7 pounds overnight.”

But it’s real, actionable, and achievable.

That’s why I’m excited to share with you the 5 strategies that I used to achieve these results.

Strategy #1: Do the Heaviest Set First with Reverse Pyramid Training 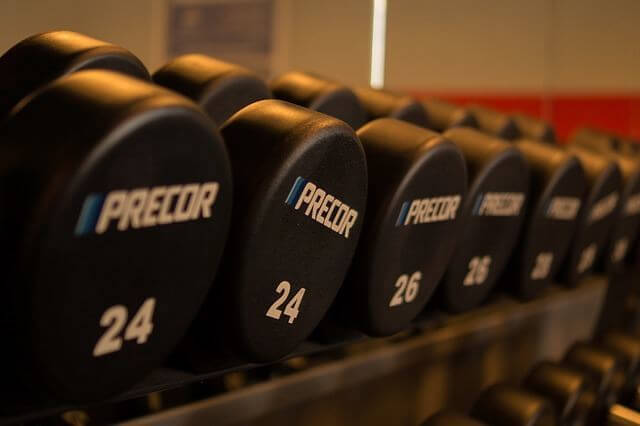 You do the lightest set first and then work your way up to the heavy weight.

The problem is that you’re super fatigued by the time you get to the heavy stuff and your strength is compromised.

With reverse pyramid training, you take the exact opposite approach and do the heaviest weight when you’re fresh.

From there you decrease the weight and do more reps as you fatigue, which makes way more sense.

Here’s an example with weighted chin-ups:

You don’t want to feel like a wimp and decrease the weight.

You’d rather just power through it and tell yourself that you’ll get all the reps next time.

That’s how I trained up until recently.

Now I see the true value in doing 1 heavy set:

Strategy #2: Narrow Your Focus to 1 Exercise 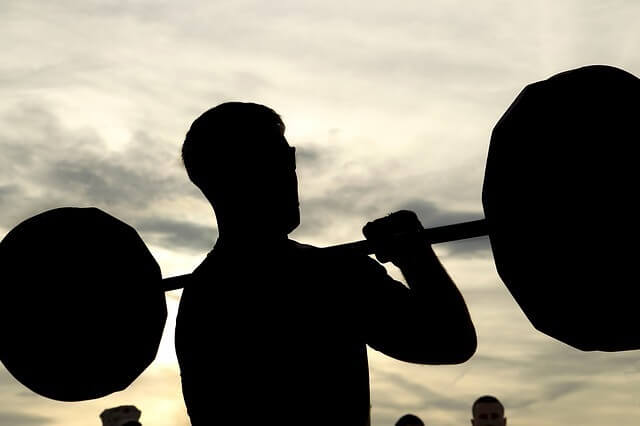 I want to get big.

Bodybuilders use a variety of exercises, hitting the muscle from every angle.

Therefore, I must use a bunch of different exercises to get big.

Unfortunately, this is the kind of logic people use when they train in the gym.

I’m going to let you in on a little secret:

Most pro bodybuilders (if any) aren’t natural.

So with this being the case, you have to train smarter.

Getting strong with 5 different exercises per body part isn’t going to happen.

You have to hone in on 1 exercise per muscle group.

Oh yeah, and the exercise can’t be some silly isolation movement like the pec deck.

This isn’t to say that you can only ever do 1 back exercise or chest exercise at a time.

What you do after that is secondary.

Strategy #3: Rest at Least 3 Minutes in Between Sets 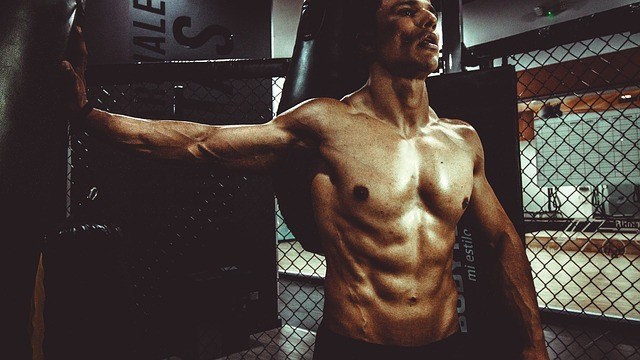 I first started lifting weights when I was in high school for athletics.

During these workouts, there wasn’t really much time to rest.

You did a set, then your partner did a set, and when he was done you went again.

When the 4-minute timer went off, you immediately moved on to the next station.

At most, you would get about 45 seconds of rest in between sets.

This non-stop mentality definitely came with me to college.

I felt awkward sitting around for anything longer than 90 seconds.

I had to be moving and break a sweat for the workout to be good.

However, when you’re training for strength, you need to recover sufficiently to allow for maximum output during the next set.

Not only does this make sense intuitively, research has provided strong evidence of this as well.

Scientists at Eastern Illinois University found that resting 3 minutes in between sets of bench press resulted in more total repetitions compared to only resting for 2 minutes or 1.

So needless to say, if you want to lift more, rest more.

Strategy #4: Hit it Twice Per Week 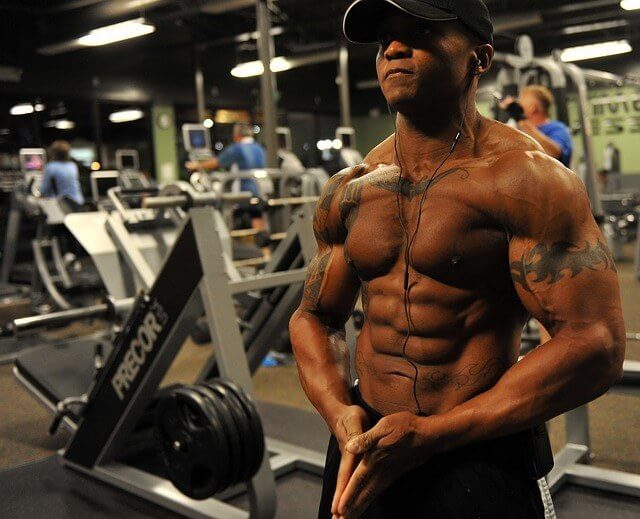 I have to admit I was wrong…

I only did pull-ups 1 time per week.

I could’ve made progress faster if I had done them twice per week.

So then why didn’t I?

I was afraid of plateauing.

People avoid hitting a plateau like it’s the plague.

If you do hit a wall, then at least you were making progress and getting stronger up until that point.

That’s far better than constantly changing up exercises and rep schemes workout after workout just to avoid a non-existent plateau.

Most weeks, I added 2.5 pounds to my weighted pull-ups.

If I had been doing pull-ups twice per week, I could’ve reached 50 pounds in those 2 ½ months instead of 25.

Heck, even if I did hit a plateau after adding 35 pounds, I still would’ve been better off.

If someone held a gun to my head and said, “Increase your weighted chin-ups by 20 pounds in a month…”

…you better believe that I’m going to be doing weighted chin-ups more than once per week.

Strategy #5 Find Your Sweet Spot for When to Train 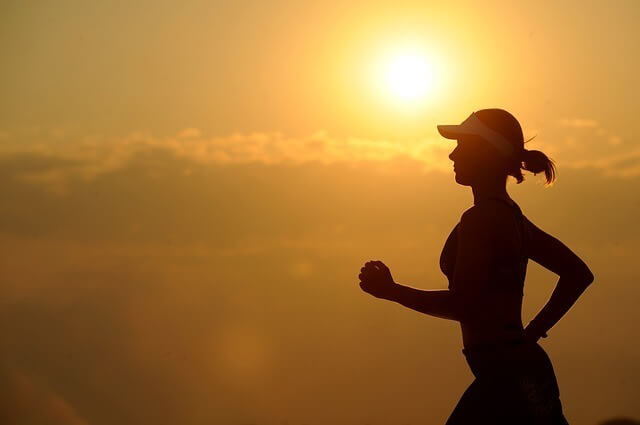 I’m a big believer that the best time to workout is whenever you can workout.

However, research does show that you’ll be stronger working out later in the day.

I found this to be true with myself.

Personally, I was strongest training in the early afternoon around 1:00 p.m. after I had eaten a meal.

I just don’t do too well waking up at the crack of dawn and immediately exercising like the Rock does.

What if your schedule doesn’t allow for you to train in the afternoon or evenings?

Then train when you can and don’t worry about it.

You have to understand that no study is perfect and that it doesn’t apply to everyone.

You might be someone who performs better earlier in the day as opposed to later, and you might not be.

In the end, you have to find your own sweet spot for the best time to workout.

Don’t overthink it though; consistency matters way more than going out of your way to lift a little bit more weight.

If you implement these ideas and tactics into your routine, I’m confident that you’ll reach insane levels of strength super fast.

It doesn’t have to be some struggle or grind.

Not only that, but the added strength will help you feel manly in the gym and gain more muscle!

About the Author: Thomas is a personal trainer and the creator of RohmerFitness.com. He loves simplifying fitness and teaching people how to get in shape without become a slave to the gym or kitchen. He also enjoys eating mint chocolate chip ice cream way more than he should.