40 Random Thoughts After 10 Years Of Fitness 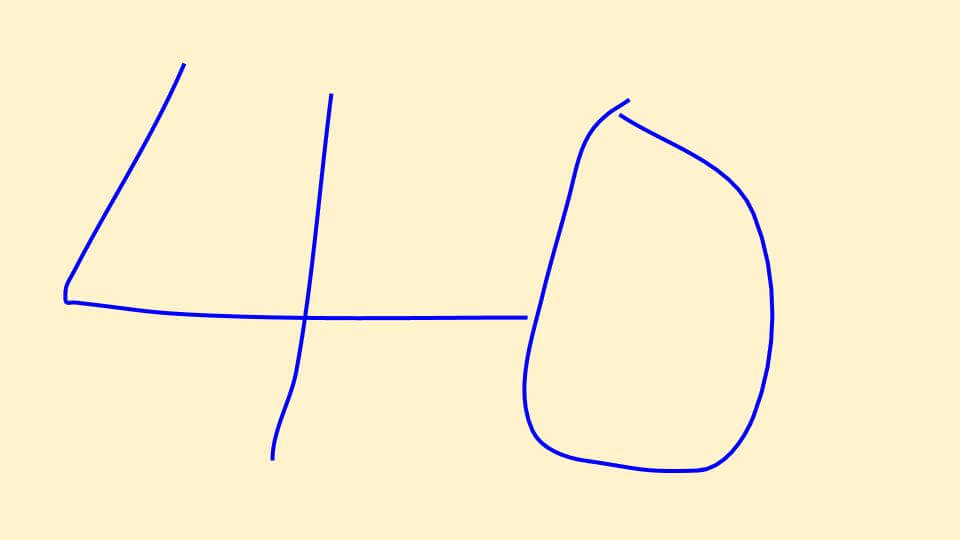 I started working out back when I was about 16 and have kept at it the past 10 years.

I’ve made a ton of mistakes.

But I’ve also been fortunate enough to learn from them and developed my own ways for staying in shape without driving myself insane.

Here are 40 random thoughts I’ve had about fitness after 10 years of actually doing it.

1) Learning how to count calories and macros is an invaluable skill.

Being able to estimate the calories/macros in what you eat is one of the most useful skills you can learn.

Which is why I recommend everyone to spend at least a few weeks hardcore tracking everything they eat.

You don’t need to do it your whole life, but tracking everything you eat for a while gives you a sense of awareness that you can’t get anywhere else.

Every fit person I know that doesn’t obsess about macros anymore has obsessed about it in the past.

And it’s that “trial by fire” that a lot of people go through before they can truly be relaxed about their eating.

Same goes for everything else:

3) You will get injured

No matter how careful you’re being, no matter how good you think your form is, time will inevitably catch up with you.

It might be a minor injury, but there will be injuries. 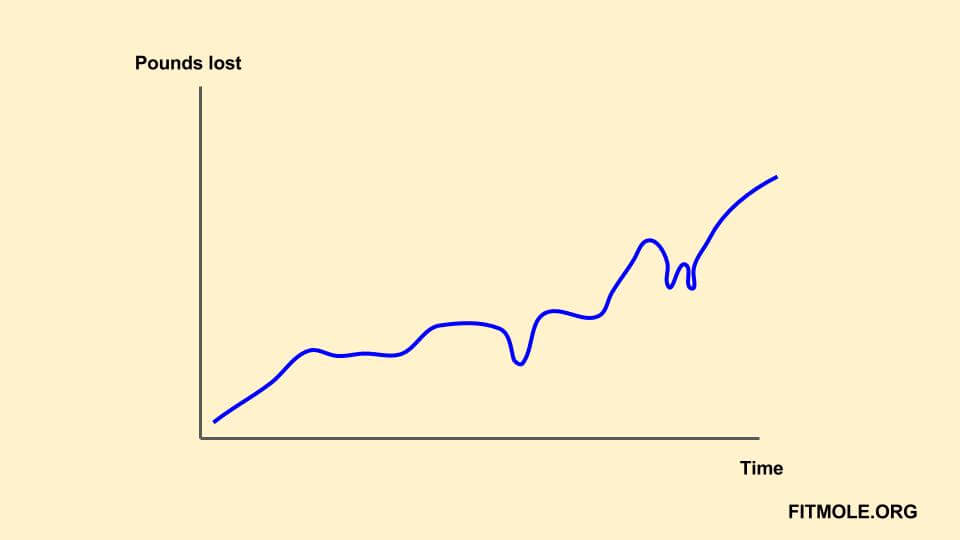 I literally just scribbled a blue line, but hopefully you get what I mean.

It zigs and it zags.

It’s a roller coaster that shows no mercy. But if you stay the course, you’ll make it your bitch.

5) You will never have enough

If your goal is to be the most muscular guy in the room, you will never reach that goal.

Saying you’ll be happy when you’re 180 pounds/10% body fat is self-defeating in so many ways.

And it never ends.

Be proud of where you are now, but don’t your tie self-worth to how lean or muscular you are. 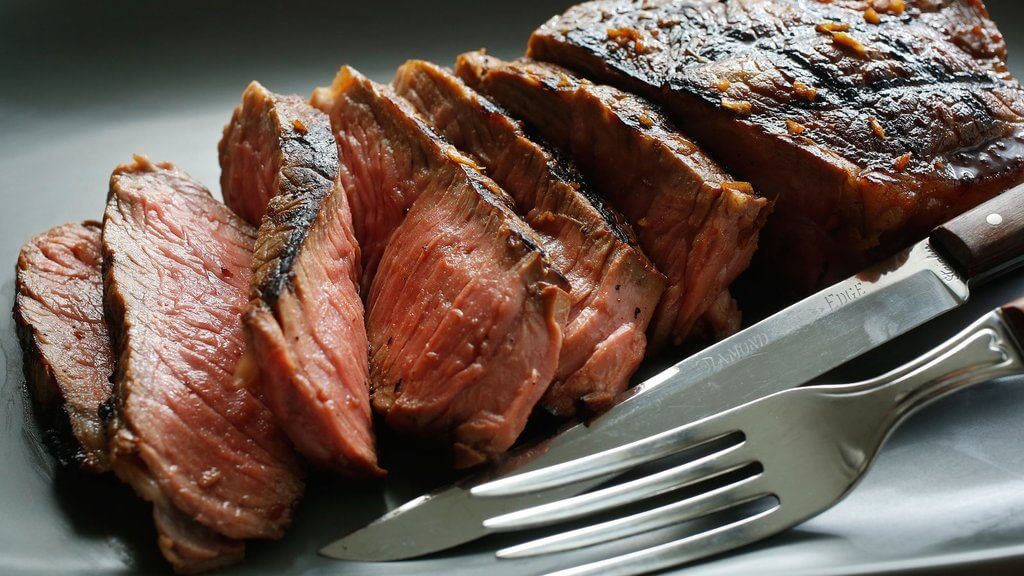 Getting the standard 1 gram of protein per pound of bodyweight is not the easiest thing in the world.

It’s definitely doable, but isn’t the most practical thing to do.

Try cutting it down to 0.6-0.7 grams. You’ll be surprised with how little things change.

7) Strength does not equal size and vice versa

There are plenty of “small” guys who can out lift bigger guys.

If you train mainly for strength, you likely won’t get huge like a bodybuilder.

If you train to get big like a bodybuilder, then you’ll get bigger. You’ll definitely gain strength too but it won’t be as much as someone who trains purely for strength.

It’s not the end of the world if you can’t or don’t want to do traditional squats and deadlifts (i.e. barbell back squat, barbell deadlift off the floor).

There are plenty of alternatives.

Don’t do it for fat loss, but do it because it’s one of the simplest ways to build your mental toughness.

A Youtube video of hacked together Elon Musk clips just gets your fired up. But unless you do something with that fire, it’s useless.

Action fuels motivation. It’s never the other way around.

11) Nothing is ever as bad as it seems

Binging on a dozen doughnuts might feel like the end of the world, but I assure you it’s not.

There is rarely a single event that can destroy progress.

The problems come when you turn single events into a spiraling dark hole of self-destruction.

Stop with the excuses and track what you eat.

You’re eating more than you think.

You can recover from one diet slip up or one missed workout.

But it becomes harder to recover once you miss two.

Negative momentum is a real thing.

14) Abs are not made in the kitchen

They are made in the gym and revealed in the kitchen.

15) People don’t eat because they are hungry. They eat out of habit and emotion.

People in 3rd world countries eat because they are hungry and to stay alive.

And if you’re reading this, you’re probably not starving in a 3rd world country.

Instead most people eat when they’re bored, emotional, or out of habit.

But true hunger is always last on the list.

Saying something increases your metabolism by 30% sounds sexy.

Problem is, it doesn’t translate to anything in the real world.

17) Not a single motherfucker on this planet has ever gotten fat from eating too much fruit.

Just stop with the anti-fruit talk.

It’s embarrassing and sounds like something Rob Schneider’s dad would say.

I don’t even know what that means. 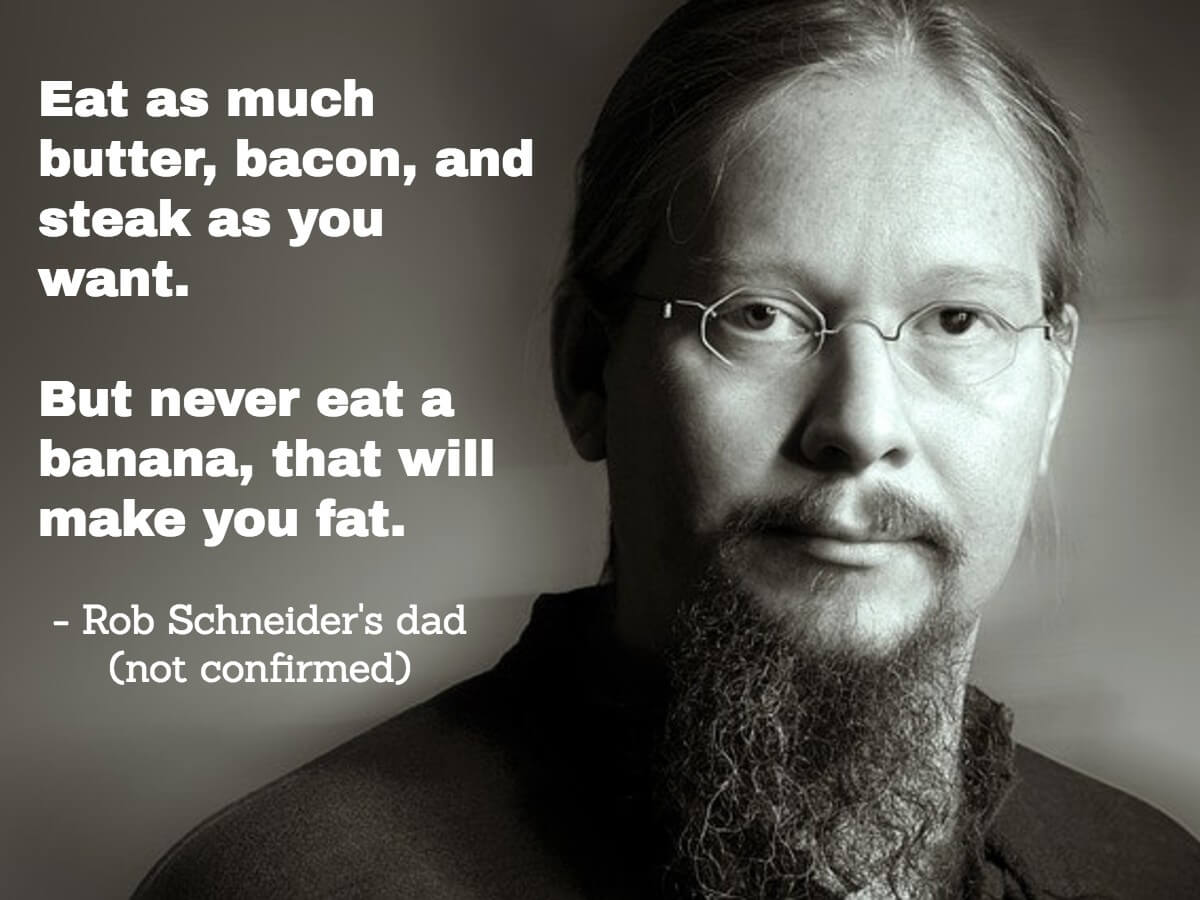 18) Never blindly follow advice. Take from multiple sources and think for yourself.

Don’t just listen to me.

Don’t just listen to that one ripped guy on Instagram.

Don’t just listen to someone just because they’re a doctor.

Question everything and everyone.

If you don’t learn to think for yourself and form your own opinions, you’re just a slave.

19) Most people don’t want to get lean and muscular. They just want to be happy

In the end, everyone is just trying to fill a gap in their lives. Any many guys use the gym to fill that gap.

20) If you want to get better at anything, track and document your diet and training

Unlike that stripper who said you’re the cutest guy she’s seen all night, numbers never lie.

Want to increase your bench?

Then you need to track every workout you do – reps, sets, rest time, and even your mood.

Documenting what you do let’s you look back and analyze what went right and wrong.

I don’t see the point, even to test your 1 rep max.

Train in the 4-6 or 6-8 rep range. You’ll still get strong and minimize injury.

When I first started intermittent fasting 9 years ago, I thought it was magic.

Like it had some magic fat burning advantage over every other diet.

But then I realized that was stupid.

The only “magic” was that it made it easier to stay in a calorie deficit.

To some it may seem like magic, but I assure you, it’s not.

You’re pretty much saying you’re gonna go the rest of your life without carbs.

Sit down and ask yourself – can you do that?

24) All detox diets are a scam

26) To build more muscle, slow down your reps

You need to really squeeze and contract the muscles you’re targeting.

27) Ignore statements like “Your body stores carbs as body fat.”

This statement never made sense to me.

But just because you ate some carbs (or fat or protein or alcohol), doesn’t mean it’s getting stored as body fat.

Only way that happens is unless you eat too much it.

28) Have micro goals but a macro game plan

People love to bash on 4 week workout plans because they’re “short term,” but that’s only if you stop doing shit after 4 weeks.

A better approach would be define your goals in 4 week blocks of time and to put all your focus into those 4 weeks.

Then you can focus on the next 4 weeks, and so on.

This way, you’re not overwhelmed with trying to do everything at once. You just need to focus on the getting through the next 4 weeks.

29) Unless it’s your job, arguing about fitness is the most pointless, soul sucking shit ever 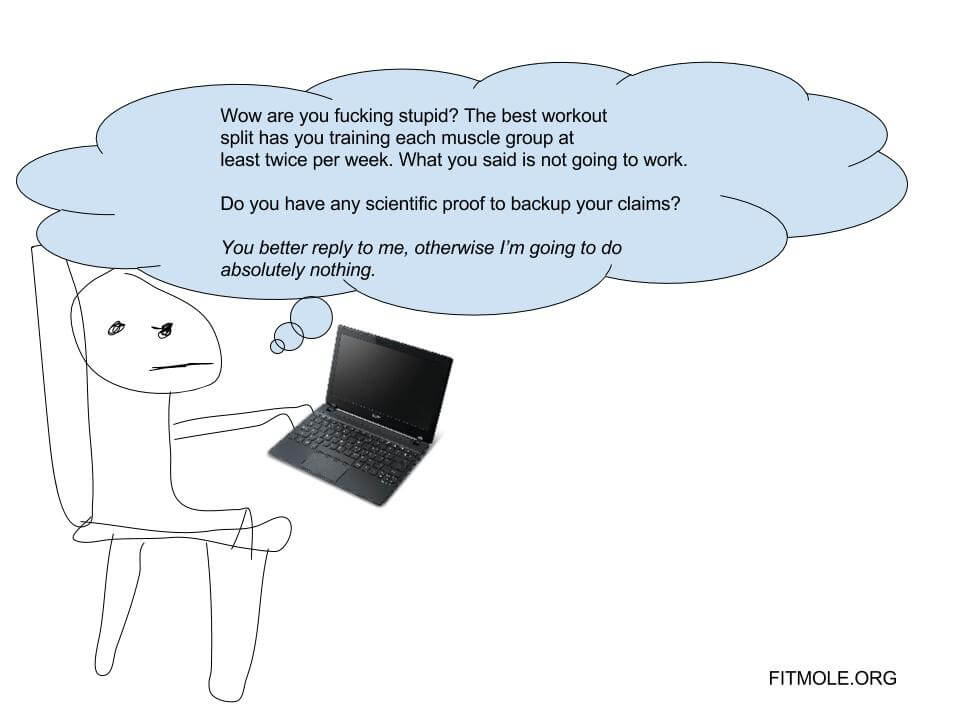 Get a hobby, guys.

Nothing will crush a person’s soul faster than arguing about why their workout or die is superior.

It’s your life, but c’mon dawg.

It doesn’t matter if you workout 2 hours per day if it just leads to your burning out in a week.

You’ll see much better results if you workout 30 min per day if you can stay consistent.

31) If you had to choose between weights and cardio, choose weights

Structure your weight lifting program correctly, and it can double as a cardio routine but not the other way around. 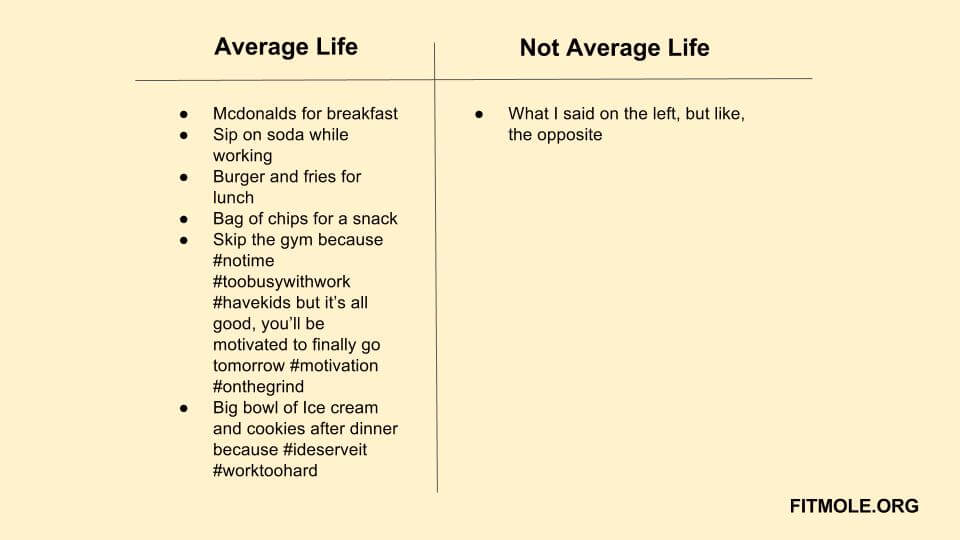 Next time, you’re about to make a questionable decision, ask yourself “would an average person do this.”

Look at what average people do. Don’t do that.

33) Your “lack of time” excuse is embarrassing

It’s cool if you admit you’re lazy. I respect that.

But someone who complains about not having time and spends 4 hours per day on their phone? How can anyone respect that?

You have the time, you just don’t want to make it (or you suck at time management).

Don’t just run on the treadmill.

The last 10 years, lifting weights has been my main workout. But recently I started Brazilian Jiu Jitsu and I love it.

To me, going to one BJJ class was 10x more rewarding than my last 5 years of lifting. But this would have never happened if I didn’t take the leap and try it out.

35) Once you blast through your newbie phase, muscle growth is painfully slow

If you’ve been training 3 years and wondering why you’re not building muscle, it’s because it’s just a slow ass process.

And the sucky part is that you can’t train more or eat more to speed up the process. It just takes time.

Here’s the timeline most guys who train consistently follow:

I’m not saying you won’t gain muscle after year 3, I’m just saying the actual pounds of muscle you gain become much harder to track compared to Year 1.

36) The solution to your problem is usually the simplest

In fact, it’s probably so simple and obvious that you’re going to ignore it completely and go search for something that sounds more complicated.

Even if it costs you more time and more money, you’ll follow it (the more complex solution) because it’s a fancy sounding plan that tells you nothing is your fault.

Nothing slows me down faster than a carb heavy meal for breakfast or lunch.

If you ever feel tired or fatigued after eating a ton of carbs during the day, try offloading them till dinner time.

You’ll feel a massive difference in the way you feel.

Technically, all you need is a calorie deficit to lose weight, but the people who lose the most weight and keep it off are those who have a healthy exercise regime as well. 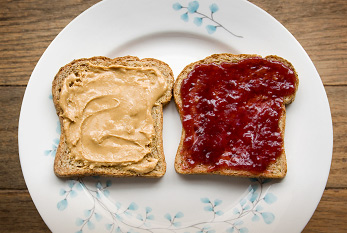 Like peanut butter and jelly, training and nutrition work best together.

If you exercise consistently, you’ll be more inclined to eat healthy and vice versa.

There’s a fine line between testing out a supplement to see if it works for you and just buying every pill pimped by a big titty IG model.

If you need a good resource on what supplements have potential, I’d recommend checking out Examine.com.

Time and time again, I’ve found that the way you think impacts everything else.

What you think leads to how you act.

How you act leads to what you get.