8 Ridiculous Myths Everyone Believes About Their Metabolism 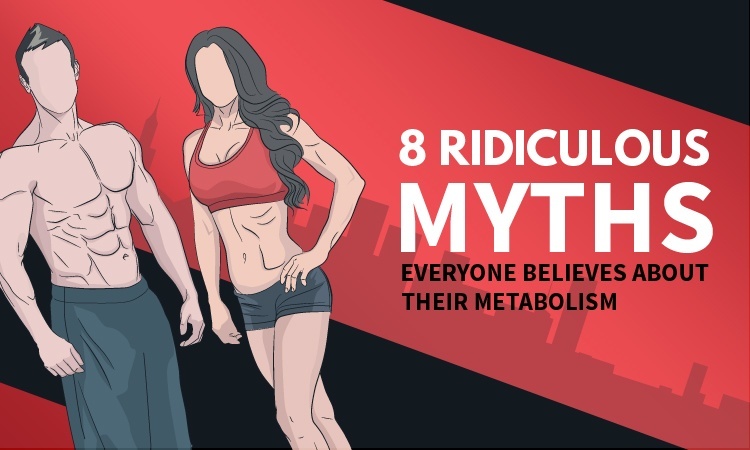 Most people believe their metabolism to be one of the most screwable parts of their body (yeah yeah, vagina butthole haha, grow up). They believe that all their fitness failures and shortcomings are due to messing up and “slowing down” their metabolism and success is solely determined by having a “good” metabolism.

And in this deceptive world of health and fitness, nothing is more misunderstood than your own metabolism. It’s a trendy word no doubt, but so-called “fitness gurus” and marketers are throwing metabolism around way too much nowadays with absolutely no meaning or substance.

In reality, most of what you believe about your metabolism is a myth, such as…

Eating 6 meals per day will help stoke the metabolic fire

The theory behind this commonly used phrase is that if you eat 6 small meals per day, your metabolism will never slow down since you’re constantly supplying your “metabolic flame” with more fuel and you’ll be able to burn more fat throughout the day.

From a body composition standpoint, there is no difference between eating 6 smaller meals as opposed to 1-3 bigger meals.

The most important thing to do is to watch your total caloric intake for the day. There’s nothing inherently wrong with eating 6 times per day, but there are no real benefits to it either.

Find the best meal frequency for your lifestyle.

Fasting will slow your metabolism down to a crawl

Continuing from my first point, fasting will not slow down your metabolism unless you take it to the extreme and do something crazy like fast for 1 week straight.

If you skip breakfast everyday and don’t eat until 2pm, you’re going to be just fine. Calm down. You could even go up to 72 hours without food as this study states and not damage your metabolism (I don’t recommend this, I’m simply trying to make a point that fasting won’t hurt you).

For a more realistic approach, you could do a Eat Stop Eat style fast 1-2x per week (read my review here).

Your metabolism slows down as you age

For example, a 60 year old man is never going to have as much muscle mass as a 25 year old man even if they follow the exact same workout and diet plans.

Older people also tend to carry more fat. So the best thing you can do to protect your metabolism as you age is to build a lean and muscular body and maintain it for the rest of your life.

So yes in this case, the saying “If you don’t use it, you lose it” really is true.

Don’t use your age as an excuse to let yourself go. There’s no reason why you can’t be old and still look fucking incredible. As long as you continue to lift weights and eat right, your metabolism will be just fine.

Okay people, it’s time to put on your common sense hats. If losing weight was simply a matter of eating “magical” foods like chili peppers, cinnamon, green tea, and unicorn blood then nobody would be fat.

It boggles my mind the amount of people who believe that eating specific foods is the secret behind weight loss.

Yes, there are studies showing foods like green tea and hot peppers increase your metabolic rate, but the amount is so ridiculously fucking little that eating these foods will never produce any noticeable results.

I’ve never heard of anyone who has successfully lost weight because they ate more chili peppers or drank more green tea. It’s absolute nonsense. There’s nothing wrong with eating these foods, but please don’t eat them for the sole sake of trying to lose weight.

A lot of people these days are doing workouts that are focused around EPOC (excess post-exercise oxygen consumption) or the calories burned after the workout. Some workouts claim that it’s able to significantly boost your metabolism up to the point that you’ll be burning more calories post-workout than the actual workout itself.

And while this sounds great, the calories you burn post-workout aren’t as significant as you think.

In fact, a 2006 study done on EPOC concluded that the majority of calories burned when exercising are burned during the actual exercise itself. Things like high intensity interval training can boost EPOC a tiny bit more than traditional running, but the amount is nothing significant. This is why people are able to get results with slow, steady-state cardio – because the majority of the calories are burned during exercise.

Quick note: Here is a smart cardio routine that really goes in-depth on how to use cardio to get as lean as you desire.

Gaining muscle will shoot your metabolism though the roof

Muscle tissue is more metabolically active than fat tissue but the extra calories it takes to maintain muscle mass is nothing to write home about. For whatever reason, the media loves to say that gaining one pound of muscle will boost your metabolism by an extra 10-15 calories, with some going as high as 50 calories.

So if you gained an 20 pounds of muscle, your metabolism could technically increase by up to 1000 calories, meaning you would get to eat 1000 extra calories per day just to maintain your weight. Sounds awesome right?

Well… the truth is that gaining 1 pound of muscle will only increase your metabolism by approximately 5 calories. This is why gaining muscle in hopes of increasing your metabolism and losing fat isn’t the smartest thing to do.

Gain muscle to be strong and look awesome, not to boost your metabolism and lose fat.

You can’t lose weight because you have a slow metabolism

Put bluntly, people who claim they can’t lose weight because they have a slow metabolism are simply lazy and ignorant.

These people have become so brainwashed by the media that all their failures are due having a shitty metabolism and that it’s “not their fault” that they can’t lose weight.

But in reality it is their fault.

Try not losing weight on 1000 calories per day.

People who blame their metabolism are people who don’t even bother with tracking their food intake.

These are people who say they got fat after college because they’re getting older and their metabolism isn’t what it used to be. Oh please! I’m sorry buddy, but you’re not fat because your metabolism slowed down, you’re fat because you eat like shit and stopped exercising. Too crude? Perhaps, but with obesity rates skyrocketing, now is not the time to kiss your ass.

Take action. Actually make an effort to track the amount of food going into your mouth. Get your ass to the gym and train with a purpose – lift weights and train with intensity. Do this for a few weeks, and I guarantee your metabolism will magically fix itself.

You can’t gain muscle because you have a fast metabolism

Yes skinny guys have problems too and one of the most common problems they have is that they can’t gain muscle because the believe that their metabolism is too fast.

And it’s true – some guys (especially younger ones) have faster metabolisms, but more often than not, the real reason skinny guys can’t gain muscle is simply because they’re not eating enough consistently.

Skinny guys who say that they eat a lot typically make one or more of the following mistakes:

Some skinny guys really do have fast metabolisms, but that’s not the reason they can’t gain weight. Instead, most skinny guys lack appetite, have no idea on what it truly means to eat a lot, or don’t even make the effort track their calories.

Yes, I’m asking for a shameless ‘LIKE’ but it’s easy and it’ll (maybe) shut up that annoying friend you have that always complains about their metabolism.

What do you guys think? Drop a comment below with the most ridiculous metabolism myths you’ve heard.