I’m a huge fan of action movies, but I’ve only recently discovered the absolute awesomeness that is Scott Adkins after watching Undisputed 2 and 3.

Yeah I know, shame on me. If you don’t don’t know who Scott Adkins is, he’s one of the more “under the radar” action stars in Hollywood and he’s also THE most underrated one as well.

Over the years, Scott has appeared mostly in direct-to-DVD films such as Undisputed 2, Undisputed 3, Ninja, and Assassination Games.

Exactly. I seriously don’t understand why this guy doesn’t get more big movie roles, but hey, at least he’s set to star alongside the likes of Hollywood’s greatest actions stars,  Jason Statham and Sylvester Stallone in 2012’s The Expendables 2.

And unlike most Hollywood celebrities who train simply for looks and aesthetic reasons, ScotAdkins has multiple black belts in kickboxing and taekwondo.

So not only does the he have a very lean and muscular physique, he also has the real life performance to back that up (just like Michael Jai White), which is something that many Hollywood actors lack.

Watch any of his movies and you’ll see how crazy his action scenes get. 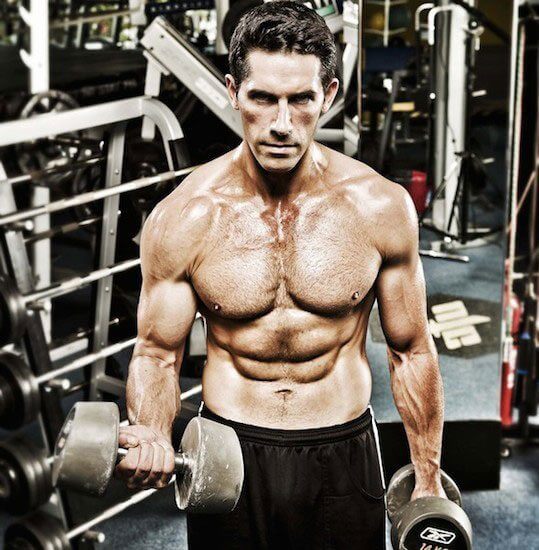 As you can tell from the picture and video above, Adkins is a very muscular man, and in order to gain any appreciable amount of mass, you need to lift weights, and you need to lift hard and heavy.

Here’s a sample weight lifting routine for you to gain muscle:

Completely optional (fat burning conditioning circuit) I’ve also added a simple fat burning and conditioning circuit to the Scott Adkins workout above. This is completely optional and I probably don’t even recommend it if you’re a complete beginner to working out. You can do this circuit after each of the workouts above. Perform the circuit 2-3 times with 30 seconds of rest between each circuit: 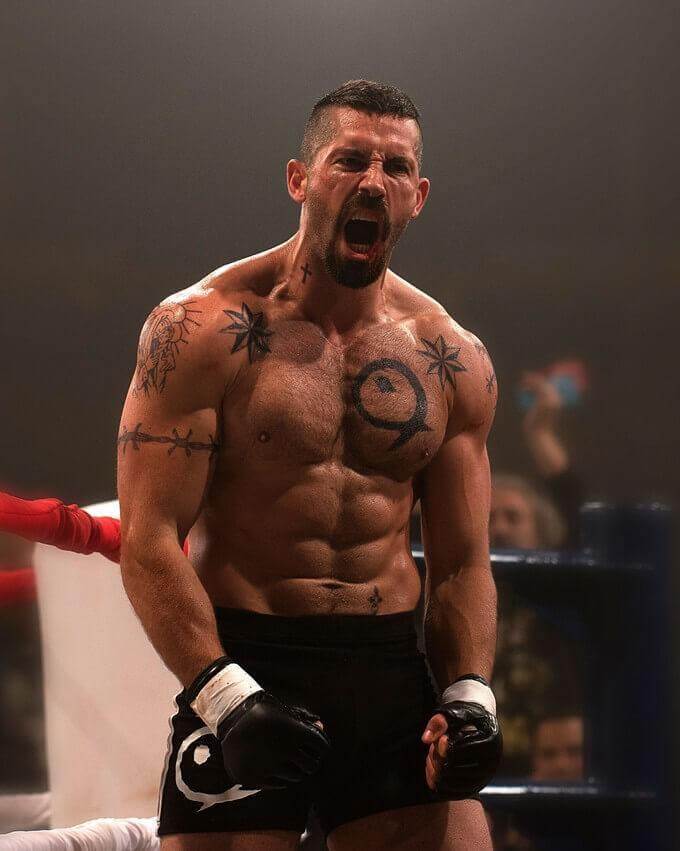 How many calories should I eat to gain muscle?

To minimize fat gains, use the following: On workout days, eat 500 calories over your maintenance: 15 * (your bodyweight in pounds) + 500

How much protein should I eat to gain muscle?

Aim for about 0.7-1 gram of protein per pound of bodyweight.

Do I need to eat pre/post workout?

It’s not 100% necessary to eat pre-workout, if you’re hungry, you could eat something light, possibly a protein shake.

Despite what most people believe, pre-workout nutrition doesn’t really impact muscle growth or fat loss. Just give fasted training a shot, you might be pleasantly surprised.

And the same goes for post-workout nutrition – don’t worry about it.

There’s absolutely no need to rush home to eat something after a workout.

Just try to eat something withing 2 hours of working out.

How many meals do I need to eat a day?

While a lot of people say you should eat 6 times a day, it’s really not necessary. Hell, you can even eat one meal a day if you want As long as all your calories are all accounted for by the end of the day then you’re good to go.

Packing on muscle quickly and efficiently

Scott Adkins has a very visually impressive body. In no way is he a professional bodybuilder, but he sports a very impressive amount of dense muscle mass and walks around with relatively little body fat.

If you’re serious about building a badass physique like Scott Adkins then I recommend checking out my Superhero X12 course.

It’s designed from the ground up to help you build a ripped and muscular body like Scott.

Let me know if you have any questions about the Scott Adkins workout in the comments below.