I mean, who needs laser beams and adamantium claws?

Since Arrow is a show that constantly shows Stephen Amell working out shirtless, people are inevitably going to wonder how he got so ripped. Is it really as simple as sparring with your black driver and doing a bunch of crazy pull up variations?

Maybe you just need to build your own salmon ladder and you’ll be on your way to ripped superhero glory, right? Well let’s be realistic, looking like Stephen Amell isn’t a matter of fancy pull-up techniques.

If you want to build a ripped superhero body (also see: Tom Holland Spiderman workout), then you need a solid foundation of muscle. No matter how low you get in bodyfat, it’s not going to look good if you look like a twig.

Your goal isn’t to look like Andrew Garfield in The Amazing Spiderman, who by the way was way too skinny for that role.

Your goal is to become the Green Arrow. Stephen Amell sports a more than decent amount of muscle. He’s not at that bodybuilder level of muscularity, but instead his muscle mass is a natural fit for his body: not too much, not too little.

And yes, I know Stephen does a lot of Parkour (freerunning) but that is out of my range of expertise and Parkour isn’t the best way to build muscle.

Principles you must follow in order to gain muscle:

If you’re not progressing, you will not gain muscle 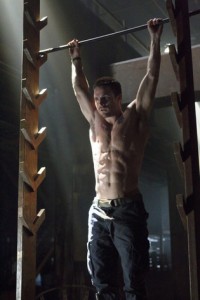 Stephen Amell never officially said how often he worked out, but if your goal is to gain muscle and you’re a beginner, then don’t workout more than 4 times per week.

Any more than that is a bit overkill.

My Superhero X12 course is based around this principle. I also read on his Facebook page, that Stephen does yoga. This is fine for flexibility and mobility, but if you just want to look good naked then just focus on lifting weights.

Focus your workout on compound movements, but include isolation exercises as well

The majority of your workout should mainly be comprised of heavy movements such as presses and rows. But to gain the maximum amount of muscle you need some isolation exercises as well to really hit a specific muscle.

For example doing exercises like the incline shoulder press and military press will contribute to 80% of your shoulder development, but with throwing in some side lateral raises to really focus on those shoulders, you won’t maximize your shoulder growth.

Having wide shoulders is especially important since it contributes to the coveted V-taper physique that all guys should aim after. As a general rule, you should aim to build your shoulders to the point that they are 1.61 (the golden ratio) times bigger than your waist.

This is what Stephen Amell has which is why he looks so good.

Obviously, any workout is incomplete without a solid diet plan.

One of the biggest mistakes that guys make (younger ones, especially) is that they train hard but don’t eat enough.

If you’re a beginner, you’ll undoubtedly see results from training alone but to maximize your gains you need to make sure you’re taking in enough calories. But at the same time, you can’t just start eating everything in site.

You want to gain the maximum amount of muscle with as little fat as possible.

A good formula to calculate this is: 16 kcal times your bodyweight in pounds.

If you start getting super fat, then start decreasing your calories by 100-200 per day. And vice versa if you’re don’t gain any weight.

Eat 0.8 – 1 gram of protein per pound of bodyweight

You need adequate protein to gain muscle. Using 0.8 grams of protein per pound of bodyweight is a good daily minimum to shoot for.

Get at least 20% of your calories from fat

Dietary fat helps boost your testosterone, helps keep you satisfied, and prevents your hormones from being fucked up.

This is why it’s probably a good idea to get some fat in your diet. Get at least 20% of your diet to come from fat.

You can get it from sources like coconut oil, avocado, steak, etc…

After hitting the protein and fat requirements above, fill in the rest of your calories with carbs.

And no, carbs are not bad for you and won’t make you gain weight.

Too many calories make you fat, but there’s nothing specific about carbs that make you fat.

Edited 09/25/16. I recently edited the arrow workout below based on feedback to make it more effective. Enjoy 🙂

How long will it take to get a body like Stephen Amell?

Ah, well isn’t this the million dollar question? I’m sure you all would love me to tell you that it’s only going to take exactly 6 weeks or 3 months of hard work and boom- you’ll have a lean and muscular superhero body.

But the truth is, I can’t tell you sh!t.

It’s really hard for me to give you a time frame. But realistically you can expect a pretty drastic transformation (no matter what your starting point) if you train and diet consistently for 6 months.

Lean and muscular, NOT bulky is the way to go

No matter what your starting point, your end goal is to build a body akin to Stephen Amell. Getting a body like Stephen’s is a delicate art. You need to remember that Stephen has a Hollywood physique (lean and muscular, but not too bulky).

This is exactly why I created my full blown course, Superhero X12 to help guys get ripped and build a badass Hollywood body.

It covers everything you need to know, A-Z to get in superhero shape with ease. If you have any comments or questions on how to do Stephen Amell’s workout or how you should eat then be sure leave them in the comments below.