Zac Efron Workout Routine To Get Jacked: How He Went From Scrawny To Brawny

If I was a girl I would totally want to do things to him like make him taco, run my hands through his eyelashes, and read Harry Potter to him.

But I’m not a girl so um…okay this is getting weird.

In all seriousness, Zac Efron has made a seriously impressive body transformation over the last few years.

From looking lean and defined in Neighbors to now getting totally jacked & ripped in the new Baywatch movie.

How did he pull it off?

I don’t know his exact workout and methods but I have a pretty good idea.

Here’s how you can pull of a similar Zac Efron body transformation if you follow the steps below. 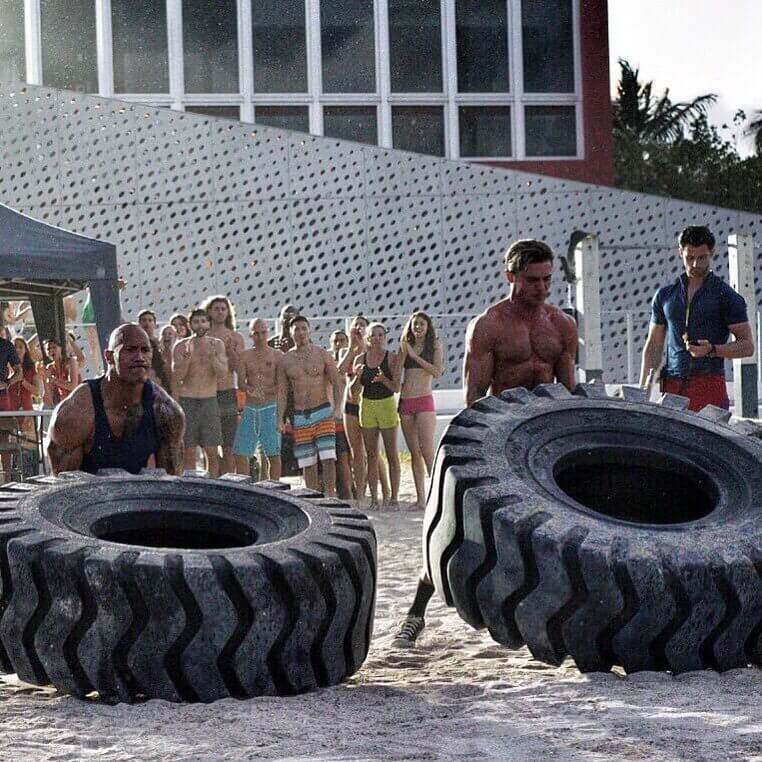 Comparing Zac Efron’s physique Neighbors and before to how he looks in Baywatch, he’s like a completely different dude.

He put on at least 10 pounds of solid muscle on his upper body and looks like an absolute beast now.

I remember how a ton of guys wondered how Efron got in shape for Neighbors, but his Baywatch physique is at a whole other level.

Getting a body like him in Neighbors is more of a fat loss issue where you need to focus on losing fat but if you want to look like Zac in Baywatch, then you really need to focus on lifting hard and eating more.

But for Baywatch, I would estimate that Zac Efron is about 5-10 pounds heavier putting him at 165-170 pounds.

As you can tell from his physique, he’s not huge and he’s not super shredded but he does have excellent muscle density, low body fat (10%’ish), and a great shoulder-to-waist ratio which is why his physique looks so damn good.

The crazy thing is that he’s about the same body fat in both Neighbors and Baywatch, he simply has much more muscle in the latter. 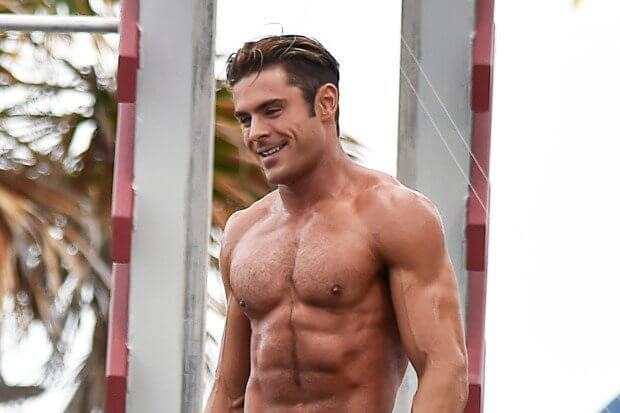 Most people reading this are looking for that one special food, exercise, or technique…and believe that’s the secret to getting a ripped like Efron.

But nothing could be further from the truth.

The real secret is plain old hard work and consistency.

But there are a few tricks of the trade you can use to help speed up the process of getting a body like Efron.

Have you heard of the golden ratio?

If not, it’s the scientifically proven ratio (1.618) that women are most attracted to when applied to your body.

Notice how broad Zac Efron’s shoulders are? If you measured them, you’ll find that they’re about 1.618 times bigger than his waist.

Having broad shoulders and a narrow waist is a sign of strength and power.

This is why it’s so important to focus on building your shoulders to get that lean, aesthetic look.

Secret #2: Your abs are not made in the kitchen

Sorry to break it to you, but you can’t really diet your way to a ripped six pack.

Contrary to popular belief, abs are actually made in the gym when you train them using direct ab movements like crunches, leg raises, wheel rollouts, and woodchoppers.

They are revealed in the kitchen with your diet and food choices.

If you’re a guy who doesn’t have a decent amount of muscle mass, then simply dieting down to a lower body fat percentage really won’t do much for you except give you a flatter looking stomach.

If you really want hard, muscular abs, then you need to work them hard in the gym.

Secret #3: It takes years to get a body like Efron in Baywatch

You want to know why 99% of guys fail flat on their face when they see a guy like Zac Efron and decide they want a body like his?

Because they don’t have patience.

They want to get game changing results in just 21 days.

But in reality, if you’re a complete newbie , it will take at least a few years to build up your body to the Efron’s level.

If you don’t believe me, just compare Zac Efron’s pre-2014 to how he looks now.

He looks completely different now, but he put in that extra 1-2 years of work to pack on all that extra muscle.

And that’s the dirty little secret no one will tell you.

Looking like a Hollywood celeb takes time, more time than most guys are willing to put in.

Workout fundamentals you MUST follow to get a Baywatch body

…but there are a few fundamentals most guys MUST follow if they want any hope of building a body like Zac Efron.

No matter what workout you’re doing, your routine should be primarily focused around heavy compound lifting.

By this I mean you need to focus on exercises that hit multiple muscle groups.

However, focusing the majority of your workout exercises like barbell curls, cable crossovers, tricep extensions is a bad idea.

You simply get 10x more bang for your buck if you focus on heavy compound movements.

Lift at least 3x per week

Assuming your workout is structured intelligently, you can workout anywhere from 3-5x per week without burning out.

As you get more advanced, it’s recommend that you bump up your training frequency and volume so your body can adapt to the larger work load.

And according to this Instagram pic, we actually know one of Zac’s workout routines include a back/biceps workout, so it’s likely he’s doing some form of push/pull/legs routine.

Back and bi’s #baywatch

Here’s an example of how to build muscle as a beginner.

Cardio could potentially be counterproductive if your main goal is pack on muscle.

Do too much and it’ll simply drain your energy to the point that you can’t perform optimally.

If you must do cardio for sports or whatever, make sure you observe your energy levels and consume extra calories to compensate for the cardio.

Or if you really just want to way to jack up your conditioning levels, do more sprints and HIIT.

If you want to just get ripped, focus on maintaining your strength

Let’s assume you already have a fair amount of muscle, and simply want to lose some fat.

What do you do?

In this case, it’s actually quite simple.

You simply need to maintain your current level of strength, eat in calorie deficit and make sure you get enough protein.

Zac Efron diet: What foods should I eat to build muscle and get ripped 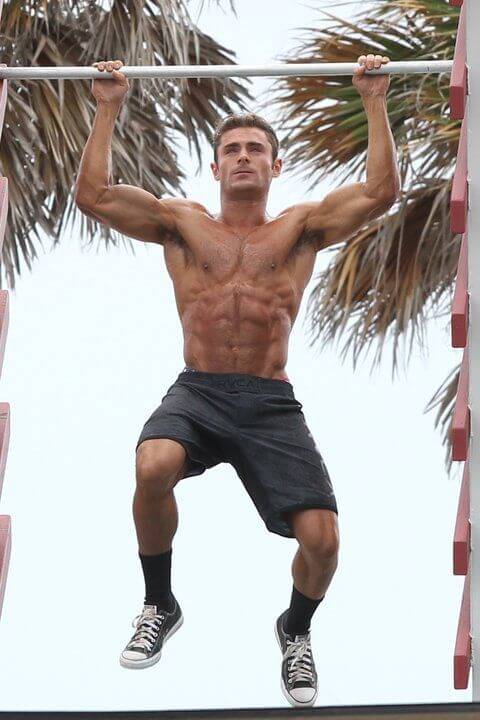 When it comes to Zac Efron’s exact diet and the foods he ate, this tweet shed some light on it:

My best guess is that Zac Efron went on the zero carb/sugar diet to shed a lot of fat and water weight quickly.

But don’t think that you need to follow this exact diet too if you want to get ripped.

A low carb/low sugar diet is effective in the short run to shed weight quickly….but doesn’t work too well in the long run….

So yeah, balance is key when it comes to long term dieting success.

Learn how to setup your own perfect diet with this easy to follow 7-step method.

People always ask me for a specific list of foods that they should eat if they want to get ripped but that list doesn’t exist.

You can pretty much eat anything you want and still get ripped.

You just need to understand that there’s a lot of give and take.

So if you want to eat a doughnut and still lose fat, just know that the doughnut is probably going to take up 25% of your entire day’s calorie intake so you’re not going to feel very satiated.

But I do have a universal set of diet philosophy that I always tell people to follow: Make sure you’re in a calorie deficit every day, eat plenty of fruits and veggies, emphasize protein (at least 0.8 grams per pound of bodyweight per day), don’t skimp on fats, and don’t live on chicken and brown rice, have fun 🙂

If you want to learn more about my super flexible approach to nutrition, check out this article on Macro FLEX Tracking.

If you want to eliminate all the guesswork about how to workout and diet to get a ripped Baywatch body like Zac Efron, then checkout Superhero X12.

It was designed with for the sole purpose of helping guys build that lean and muscular Hollywood physique and includes all the different workout and dieting plans you need to see amazing results.

Leave any questions you have on Zac Efron’s workout or any other fitness related questions.